This session was part of a group of sessions organised within the framework of the Urban Development Network (UDN). The objective of the session was to show how territorial tools such as Integrated Territorial Investment (ITI) and Community-Led Local Development (CLLD) can be used for Sustainable Urban Development for different sizes of cities and territorial area. The participatory lab set-up facilitated in-depth roundtable exchanges during which three ITI and three CLLD examples from the current programming period were discussed with participators on the lessons learned and ways ahead. Each speaker presented their work examples, outcomes, obstacles and future desired results. Each roundtable was moderated by an expert on sustainable urban development. 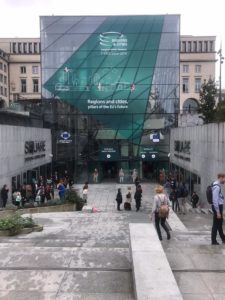 OTB team has joined the group of Dan Melander from City of Gothenburg, Sweden. The group consisted of City, Social Entrepreneurship and Architectural planning Representatives,  with the moderator Sally Kneeshaw. The main topic of discussion was the connection of rural areas with urban areas, possible ways to foster the trust of rural residents, their motivation and involvement in local community development. The discussion focused mainly on administrative difficulties in the overall process as well as ways to improve and speed up administration processes. The conclusion emphasized the need to create a bridge between areas and solutions aimed towards the facilitation of  the easiest implementation of the program.