Decent Work in the future 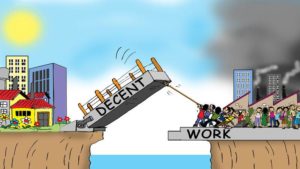 In the face of another economic crisis, some realities seem to be repeating themselves. As the economic recovery begins to take its first steps, the knowledge gathered throughout the 2008 crisis presents itself as a valuable tool. For the past few months, the unemployment rates rose, and sectors such as tourism, retail and cultural as well as artistic suffered severely. These indicators are particularly relevant for young workers, as these particular sectors absorb the majority of the under 30 year old European workforce. The rise of youth unemployment is a major warning sign, especially since the EU has been dealing with a serious youth employment crisis during the past decade.

In order to describe a group of 14 million young Europeans, identified during the last twelve years, a new term has been invented: NEET. To translate, the meaning of the acronym is “Not in employment, nor education or training”. It also means disengaged and not fully participating of social and democratic life.

If the past crisis  is a teacher… What are the lessons from the past?

As the study published by Eurofound showed, today there are 14,2% of the Europeans aged 15-29 are considered as NEET’s. To the staggering percentage of young people away from a full, freely chosen work, life bears a high cost. Starting with the fact that this many NEET’s costs 142 000 million euros each year to Europe (access to the study here)

Working in the project “Empowering Youth for Decent Work” with Out of The Box International back in 2018, research showed that the full investment of 8.8 billion euros from YG schemes and YEI funds had positive outcomes for just about 2 million out of 14 million young NEETs over a decade.

It is therefore my strong belief that this is indeed a mentality issue: as the EU was recovering from the last crisis, the young Europeans kept on being the first ones to go out. Today, and looking back, this seems more as a chronic issue than a punctual reaction to a crisis.

As all of Europe starts to work towards the Next Generation EU, presented by the European Commission, looking to the future, the notion of Decent Work, as stated in the Agenda 2030 as a SG8 (Decent Work and Economic Growth) should not be forgotten. Let’s remember.

As Member States put in place measures to address the youth employment 2008 crisis, the EU’s Decent Work definition was  included neither in the criteria nor in methods. Overall, the MS programs made available at the time to young unemployed Europeans, presented them with temporary, seasonal, insecure, underpaid and under qualified jobs. Employers now face a  grown up generation who, as they grew older,  didn’t build a career, thus improving skills and adding up value as professionals. Instead, the resulting workforce presents itself as a patchwork collection of poor work experiences, highly untrusting and discouraged generation.

Europe is at the start of a path towards recovering from a new grim crisis. It is time to make hard choices. To not choose to address the youth employment issue as a chronic mentality and decent work issue, means to deal with several “lost and scarred” generations of Europeans (as the European Council warned about in 2013) in ten years. Here is the opportunity to engage and invest, as doing enough is not sustainable.